The Sound of Music Begins!

The Sound of Music is the next big production for Bournemouth Musical Theatre Productions, being staged at the Regent Centre Theatre Christchurch from the 29th of May to the 1st of June.

As usual myself and Lisa, head of costume, are set to have a meeting to discuss costumes for the show, but not usual is the message I received the day before New Years Eve! With a promotional photoshoot being set for this week, the hire costume that was planned for use was unavailable, as was BMT's own apron, to make the initial outfit for 'Maria' in the shoot. Knowing the show and the film I knew exactly the look they wanted for the initial Maria look, the novice nun before she is sent to the Von Trapp's. The original message was to ask if I had anything that might be appropriate as it was needed for collection by the second of January. As I had nothing appropriate, I was requested to make the dress and apron - this is the first costume since university that I have made in less then 48 hours, and I must say I am very proud of it!

As it was last minute no one had the performers measurements yet, so I was asked to make it to a standard UK size 10. This presented another set of challenges as again I have gotten to used to making costumes to measurements I had to look up the UK standard on the internet and there are a lot of conflicting measurements on there. I decided that in case they decided to go with the standard twirl photo, to make the skirt as well as the apron full and as close to a circle skirt as I could manage with the pleating so that it would provide the best effect on camera.

In the event that we use this costume for the show and it involves quick changes I will have to make adjustments to the fastenings and the apron attachment, there is currently a zip fastening the dress and the apron is held with the traditional two pins in the top corners - in terms of general use though, if there are no quick change, it should work well. 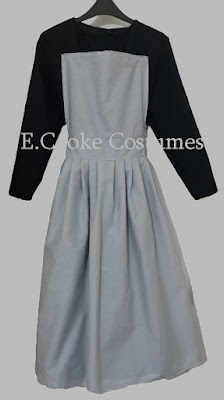 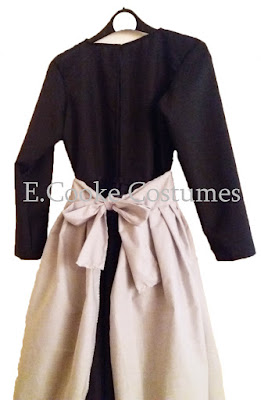 Making the apron allowed me to try out a new pleating technique I had seen demonstrated online - using a fork to make perfectly even pleats - and it actually worked! This saved me an incredible amount of time in pleating the apron to the desired volume while keeping the pleats neat and even. 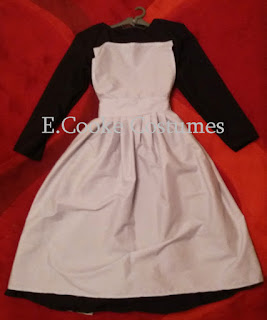 Hopefully soon I will be able to put up the photos from the photo shoot of my costume being worn. I am very excited to be working with Bournemouth Musical Theatre Productions on what will be my sixth big show with them, and I cannot wait for my meeting with Lisa to find out what I will be doing!
Posted by Elizabeth Cooke at 13:36 No comments: